In this week’s market update we examine the state of play for the price of Bitcoin and what underlying signs there are in the market as to how this multi-week consolidation may resolve.

Bitcoin continues to trade in the $10k price range supported by the 100 DMA and the 20 WMA for the fifth consecutive week.  Price action is contained within a consolidation phase with a symmetrical triangle which is close to completion.

The 50 DMA is rapidly declining towards the 100 DMA, we have seen this previously both at the consolidation in the 9k range and that in the past before bitcoin broke down from the $10 to $8k in q4 2019.

A break to the upside for this consolidation will push bitcoin back towards 11,700, whereas a breakdown would potentially see a fall as low as the 200-week moving average or the Yearly pivot at around $8.2k, however, a review of the order book reveals that there is a significant bid across most exchanges in the $9-10k price region indicating that any move to the downside is likely to be absorbed by buying interest.

While Bitcoin maintains the 20WMA and the 50 DMA trades above the 100 DMA, we remain cautiously bullish for a retest of at least 11.5k.

Looking closer at the 4-hour, the Point of control at around 10700 is the level which the bulls need to break and find support; this has been achieved a few times during the consolidation, only to be reversed by several news events including tweets about postponed stimulus talks in the states, Trump’s short COVID illness, the UK FCA banning crypto derivatives trading and the Bitmex lawsuit in the states.

Despite each of these issues, Bitcoin has printed higher lows, which is cause for some optimism around price. The 4-hour OBV is printing an ascending triangle and looks more bullish than the price action, this divergence is often a bullish sign for the directional breakout.

Looking at the funding rate and futures premium, we can see that it has been predominantly negative during this consolidation, which has been seen in prior consolidations which have ultimately resolved bullish.

Similarly, we have seen that spot price is leading derivatives which is a theme we have seen in re-accumulation periods where the underlying demand in the market is driven by spot buyers and those speculating have been overly bearish in comparison.

Bitcoin has been largely at the mercy of the correlation to the traditional markets since the 2020 black swan event.  Traditional markets being the S&P500 and Gold are also resting on their 20 WMAs with the opposite for the DXY which has proven to be inversely correlated.

We are expecting this correlation to continue in the near term and possibly through to the election in the States. 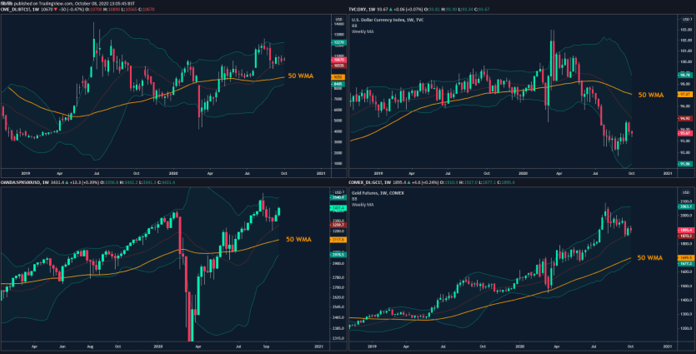 I posted the below tweet about the expansion of tether supply in the crypto ecosystem; it has expanded by 50% over the last two months which has historically been a bullish sign for Bitcoin as I discuss in this thread;

This has to be the craziest chart in crypto right now.

The positive correlation of Tether expansion / BTC appreciation in 2019 was quite something.

We remain cautiously bullish on Bitcoin having seen signs of resilience at the $10k level for the first time since 2019 and arguably it is stronger now than then, where we saw the level eventually give way.  A strong move is in the works and is likely to occur within the next 7 days.

If you would like to get access to daily updates, exclusive livestreams, trading education and insight into our positioning in the markets both for Bitcoin and alts you can join the community here at Decentrader.