In my previous update two weeks ago, I mentioned that my upside price target remained $70K but that there was evidence of over-leveraged traders driving up funding rates which could cause some short-term volatility.  I flagged the 4hr 200MA as a downside support target.

Well, yesterday we came down to that target…and kept going a little bit more!  Price has now retested a previous resistance level at $52k (red line on the chart) and at the time of writing is currently coming back to retest the 200MA 4hr.

Should it fail, there is a key support area around $48,000 where there is evidence of strong on-chain buying.

Those levels of on-chain buying can be seen below in the Realized Price chart showing major historical buying that should be well defended around $47,400: 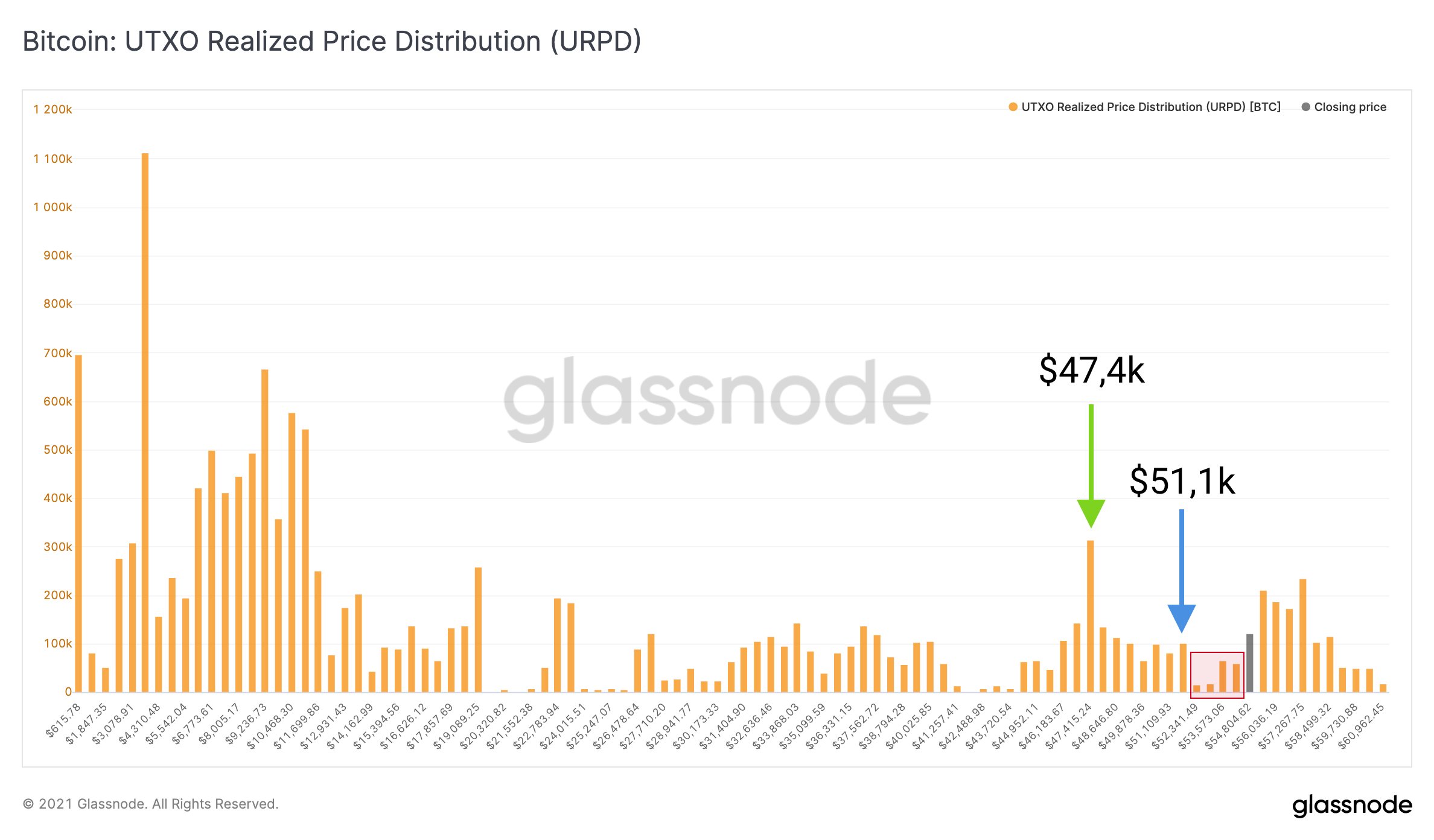 At the time of writing, funding rates are returning to neutral having been stubbornly positive on this entire move down.  This is another encouraging sign but it does not rule out another potential leg down.

While we have to navigate this short term pullback to flush out overleveraged traders, our medium term upside target of $70k remains in play based on the 1.618 fib of this fib extension at the take profit (TP2) level:

Stepping back from the short-term fear in the market as price retraces on low time frames, there is evidence to suggest that this bull cycle still has plenty more room to run.

As well as institutions and corporations such as Tesla announcing their involvement in the space, it is encouraging to see that the number of bitcoin wallets containing funds continues to steadily rise…but is yet to go parabolic.

As someone who was around in those late stages of the 2017 bull cycle, it certainly does not feel that we are yet reaching similar sentiment levels where mainstream media is screaming about Bitcoin.

This lack of hysteria is reflected in the addresses chart above, where we are yet to see a comparable parabolic move up this cycle.

I believe this is something worth keeping an eye on over the coming months should we get accelerated mainstream interest towards Bitcoin.

Enjoying the update so far? If you would like more in-depth analysis and access to trading tools and indicators, you can join Decentrader HERE.

We continue to see the amount of bitcoin held on exchanges dwindle as it is either put into cold storage (very bullish) or wrapped and used in DeFi (somewhat bullish).  Leaving less on exchanges to sell in the short term. 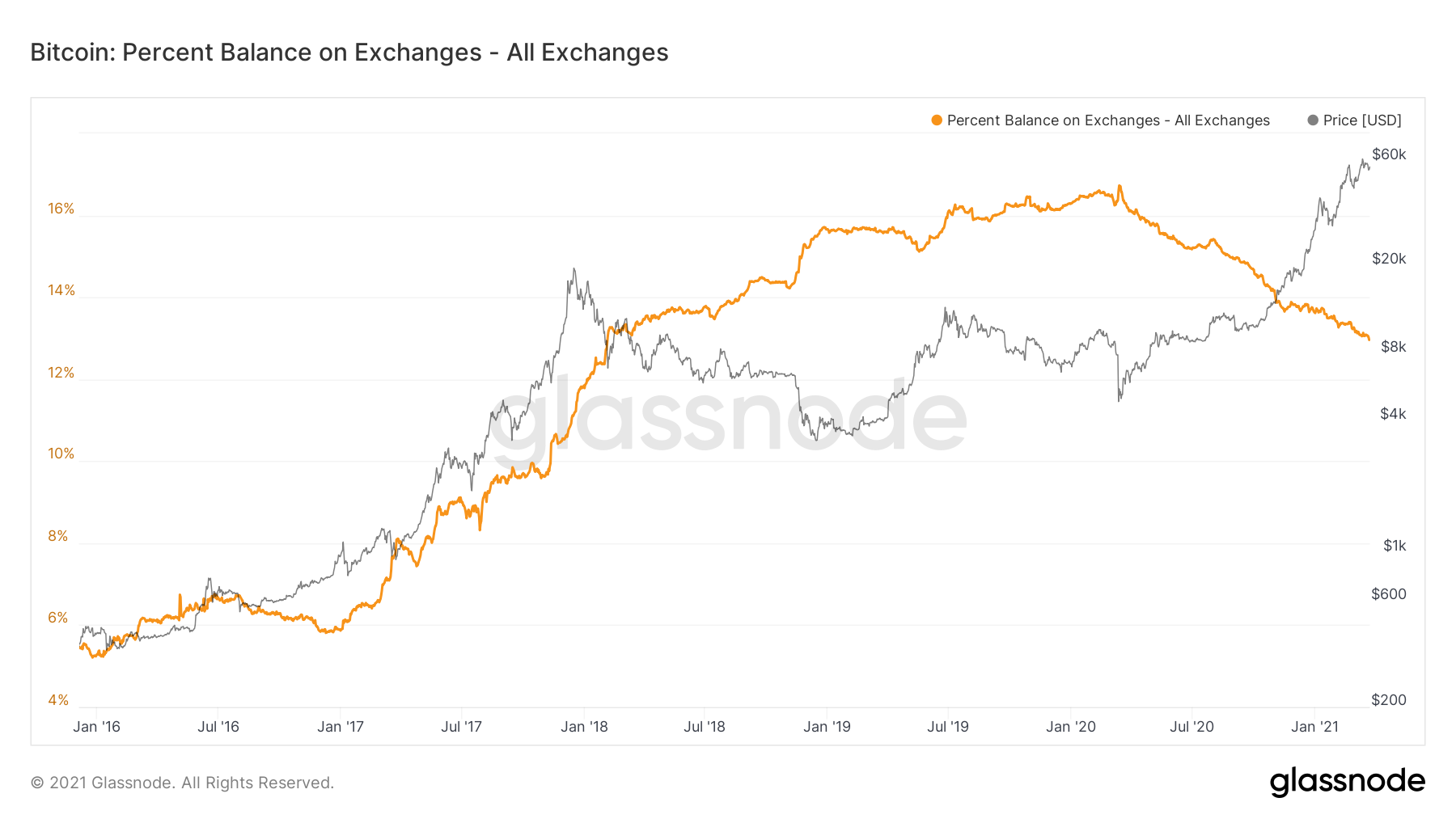 It does this by looking at relative differences between Market Cap and Realized Cap over time.  There is a full explanation underneath the live chart on the Decentrader site.

I have recently adapted the original chart which had four sentiment tiers:

While useful for large parts of Bitcoin’s cycles, they do not provide much indication around the final latter stages of the bull market.  I have therefore created a fifth level called ‘Euphoria’ which I have set at 77% on the chart and is shown by the red zone at the top of the chart here: 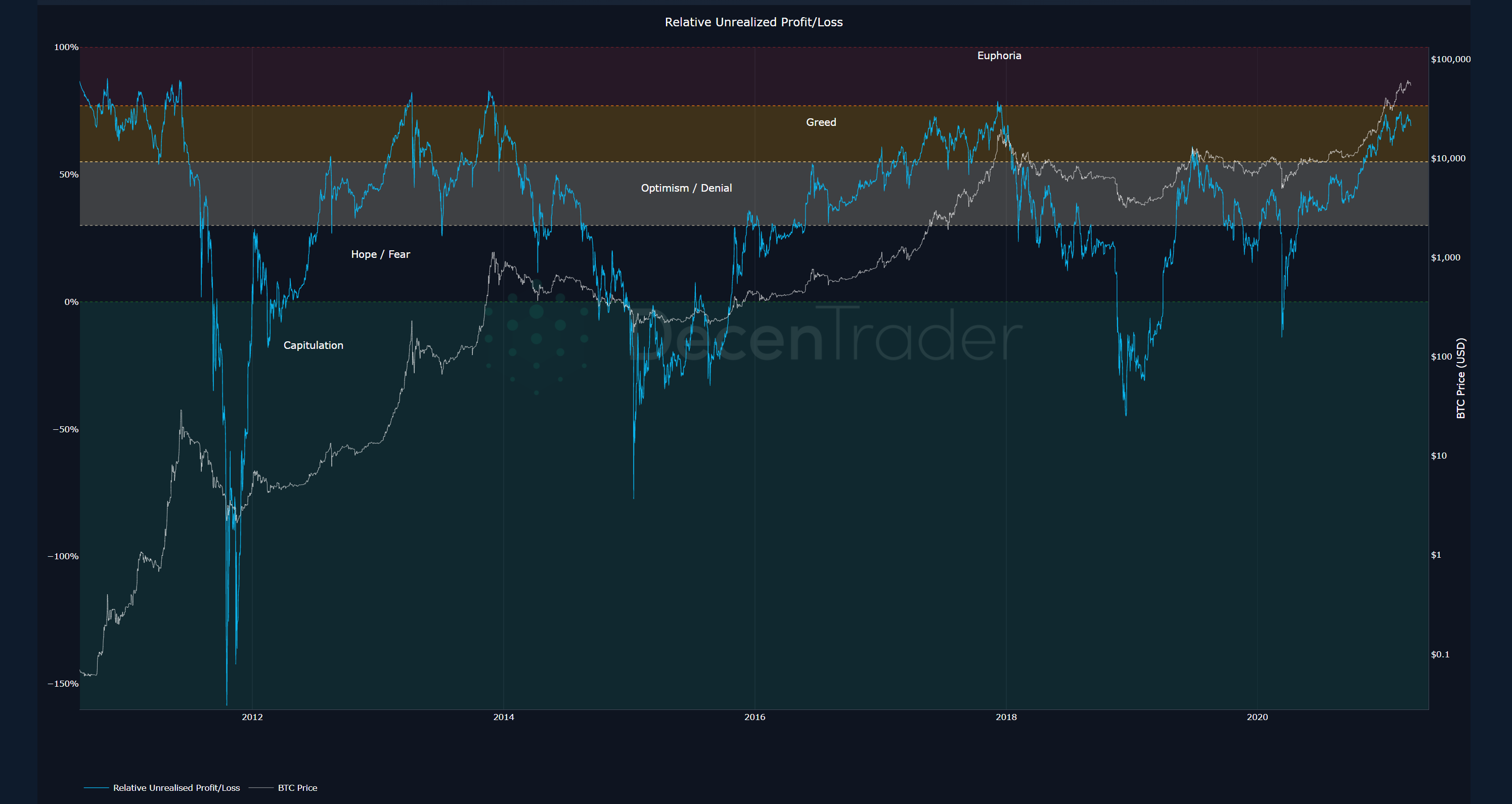 If you are a DecenTrader platform subscriber, in addition to Discord alerts on the existing levels, you will now also receive an alert when the indicator crosses above this new ‘Euphoria’ level I have created.

This should give an additional signal as to when price may be approaching potentially unsustainable levels.

What the chart is telling us now

I believe Bitcoin continues to look bullish on high time frames and is likely to reach $70,000 in the next couple of months.  It will therefore be interesting to see if such a price move triggers alerts on live charts such as the Relative Unrealized Profit/Loss.

This will happen if the indicator closes above 77% and enters the ‘Euphoria’ level. Which would indicate the need for a potential near-term price reversal.

Zooming in on the chart we can see that the indicator (blue line) is currently at 69%: 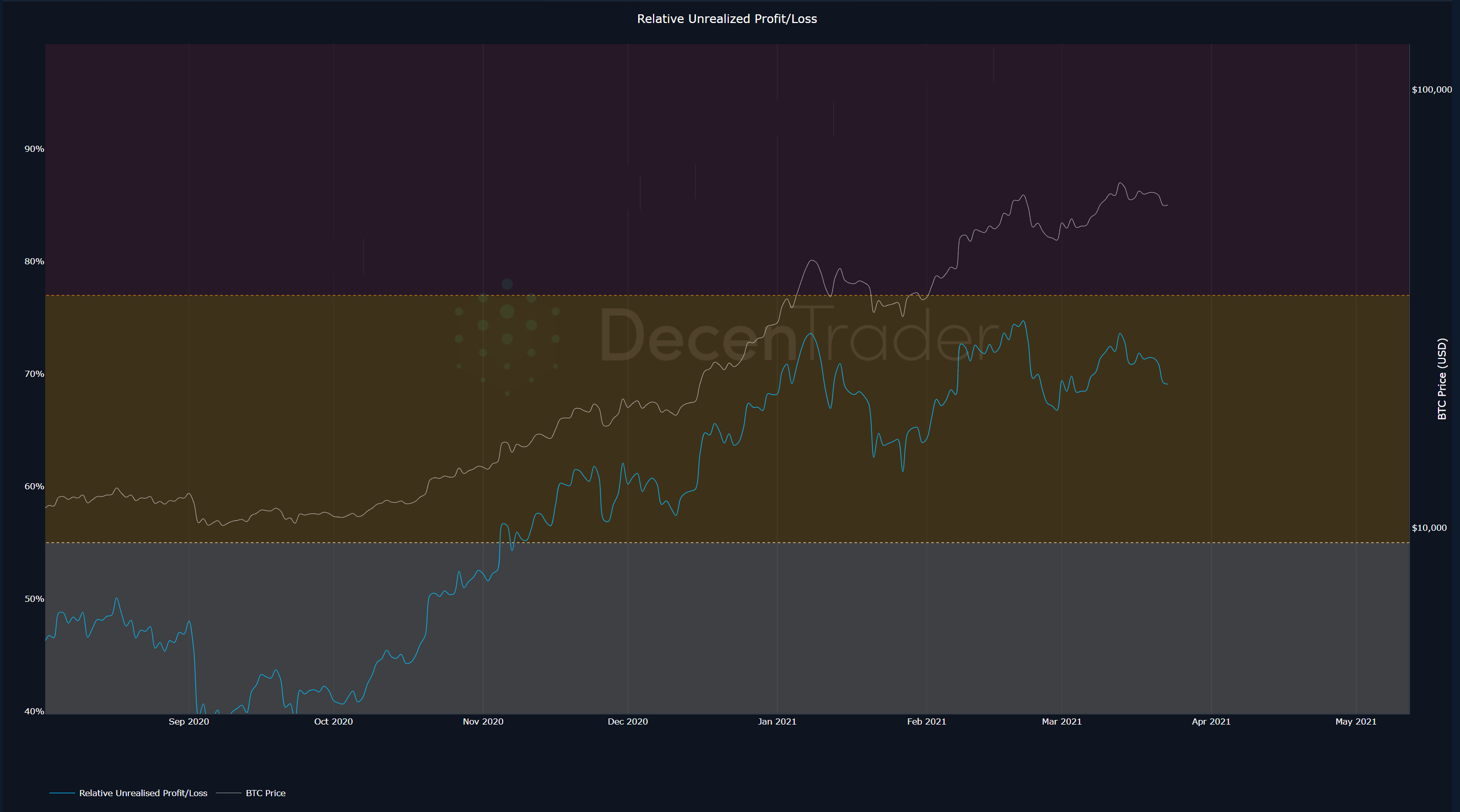 Figure 7: Zoomed-in the chart.  Blue indicator closing above 77% into the red zone would signal market euphoria

Whatever you think about the recent spike of interest around NFT’s (non-fungible tokens), it is clear that money is now entering crypto not only through Bitcoin but also through NFT’s.  This is due to an influx of people entering the space who are excited about the digital monetization of arts, music, sports, and other creativity.

A large proposition of that money will ultimately move into other areas of crypto as people look for new opportunities.

That may bring a period of time in the next couple of months where many altcoins outperform Bitcoin.

While I fully recognize that there are issues doing technical analysis on the Bitcoin dominance chart, it is quite clear at a topline level that:

Figure 8: Bitcoin dominance relative to all other crypto

I believe we may soon enter a period much like the first 6 weeks of 2021 where many altcoins outperform $BTC and we may see Bitcoin dominance drop down to low 50% levels.

If you want to discover how we are thinking about specific altcoin opportunities and Bitcoin in the coming weeks, head over to Decentrader to find out more.

Thanks and speak again soon.