After presenting a dip-buying opportunity last week, Bitcoin has recovered after options expiry right on cue.  The Overall market structure is quite similar to that of the price action which took place before the 20k breakout.

Coming on the 14th of April is the much anticipated Coinbase IPO; expect there to come with it quite a media fanfare and additional interest.  I am bullish on crypto anyway but I do think this narrative has legs for Bitcoin, Ethereum, and other Exchange coins such as BNB and FTT.

Bitcoin has taken its sweet time flirting between $50 and $60k for most of March and now has a 2021 VWAP of $41k which is impressive in its own right.  With the Coinbase hype, continued stimulus, and general accelerated adoption across corporate and institutional balance sheet’s higher prices are not all that difficult to imagine.

A few weeks ago I shared this similar price action/market structure as what was seen around the $20k level, which had a correction back to c.50k before a violent breakout.  Since then price has almost perfectly played ball with this idea and is now threatening a breakout.

With the weekend looming amidst a buoyant week; it’s difficult not to be optimistic.  I’m not thinking we will break out with as much ferocity, but I do think that we are on the brink of a strong breakout. 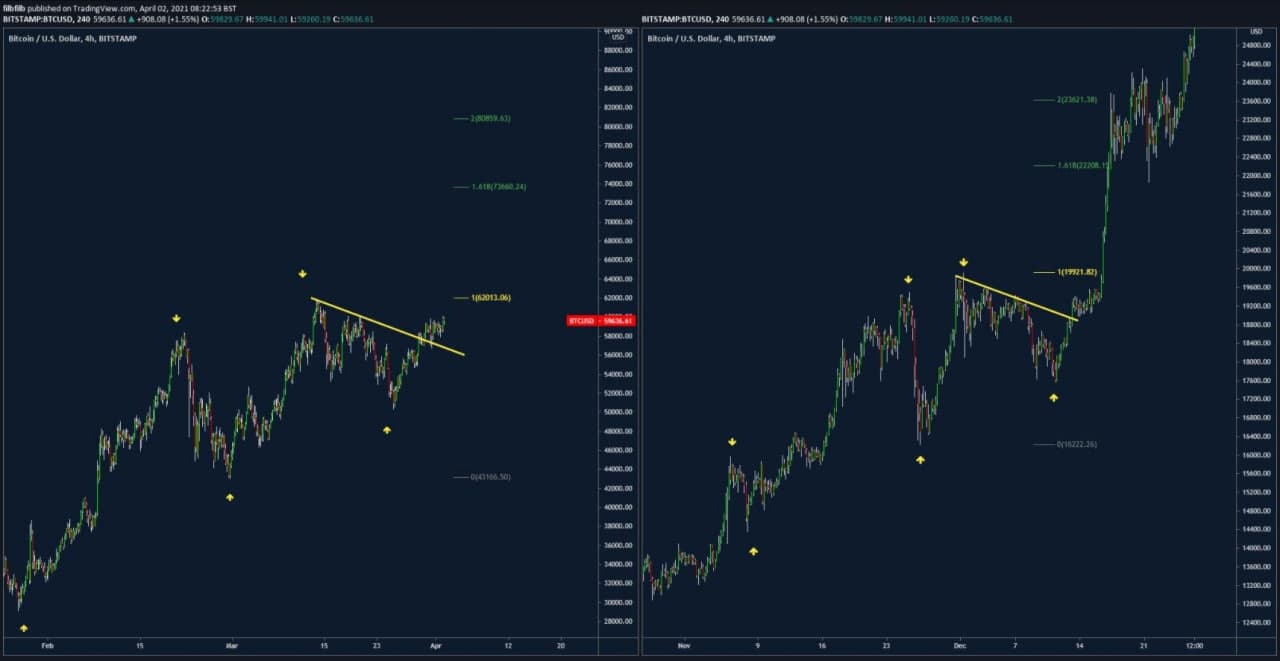 The longer-term view is that we are still looking to test the up quartile of the logarithmic channel, which would see the repeating fib extension channel taking us towards $70 and $95k. The length of the consolidation at $60k has given a reasonable base of support from which to drive higher and as such these remain targets, with obviously needing to exercise risk management along the way at these lofty heights, it doesn’t seem unreasonable. 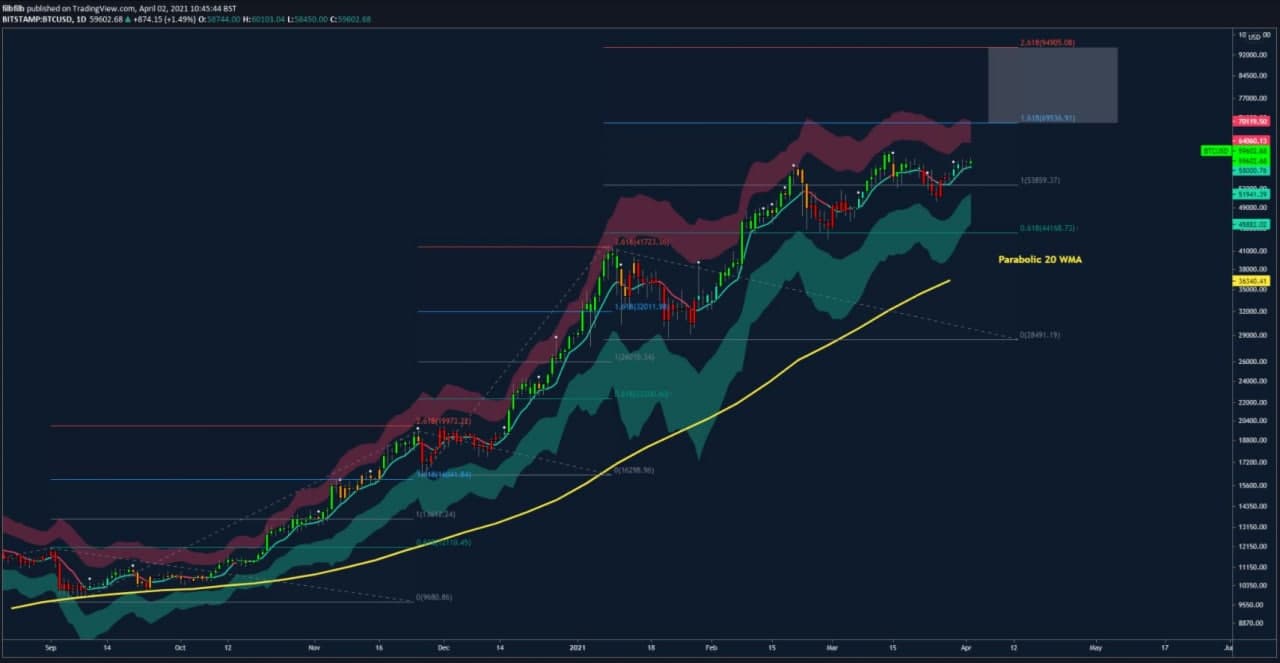 While we have green daily candles on Predator we will be tilted heavily to the bullish side.

Bitcoin dominance has clearly been on a decline, with alts quietly going business while Bitcoin has gone sideways. As can be seen in below, Alts have already broken out whereas Bitcoin has been a little laggy. In the context of the current scenario, being a reasonable way through the cycle in terms of price, historically, late-cycle has really been the time alts have broken out. We are expecting to see dominance fall towards the 52-54% level in the next few months; but clearly, this does not mean we are all in on alts and still maintain majority Bitcoin exposure. 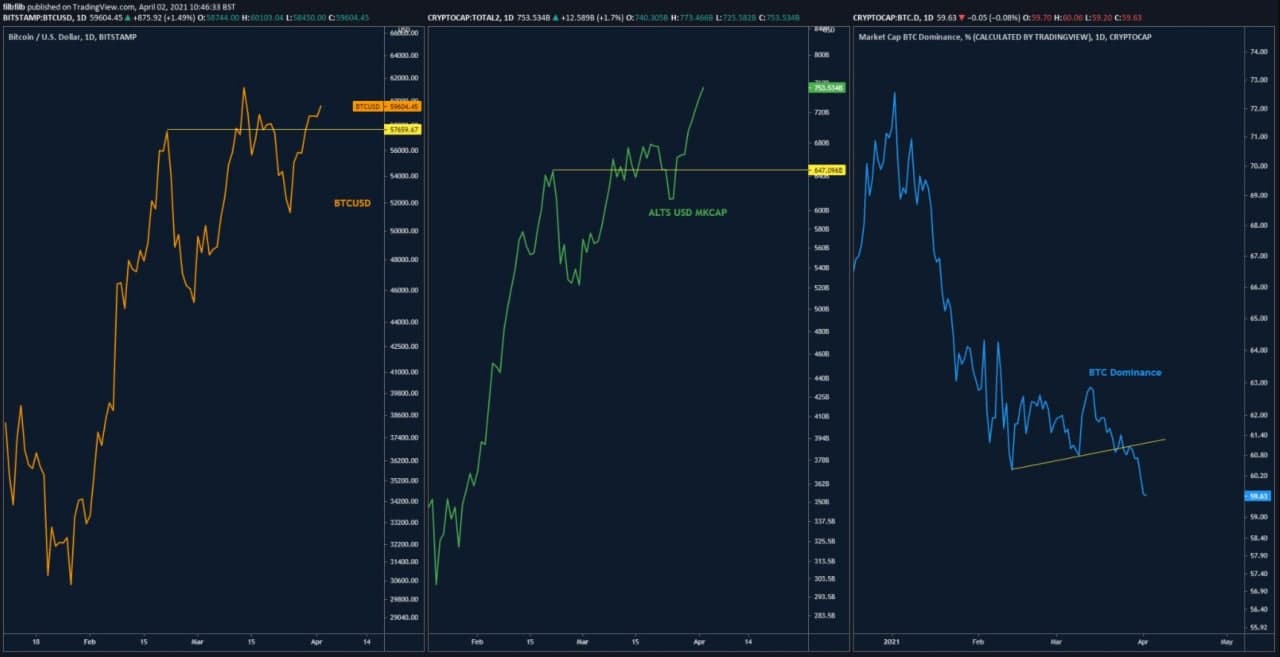 We have been utilizing the Decentrader Commando Tool to identify opportunities. This uses a proprietary Decentrader algorithm to scan the market enabling us to identify what alts present the best immediate opportunity, where a Commando print of a score of +2 or higher… on average results in a price increase of +4% over the following 24hrs with a 76% probability of price being higher during that time based on 3 months forward tested data across more than 15 cryptos.

Ethereum is advancing towards its 1559 upgrade, alongside which ETH is also posting what looks like a classic Livermore Speculative Schematic, which would see the end of accumulation come about over the next couple of months, preceding the bigger move to the upside.

While the ETH/BTC targets below seem high, they do generally fit with the chart history and potentially a mini-mania. So I would classify this chart as being un-ironically speculative by nature. However, I think we will know within 8-10 weeks of the upgrade, so It could still be another month before things really get moving (if it is going to happen). 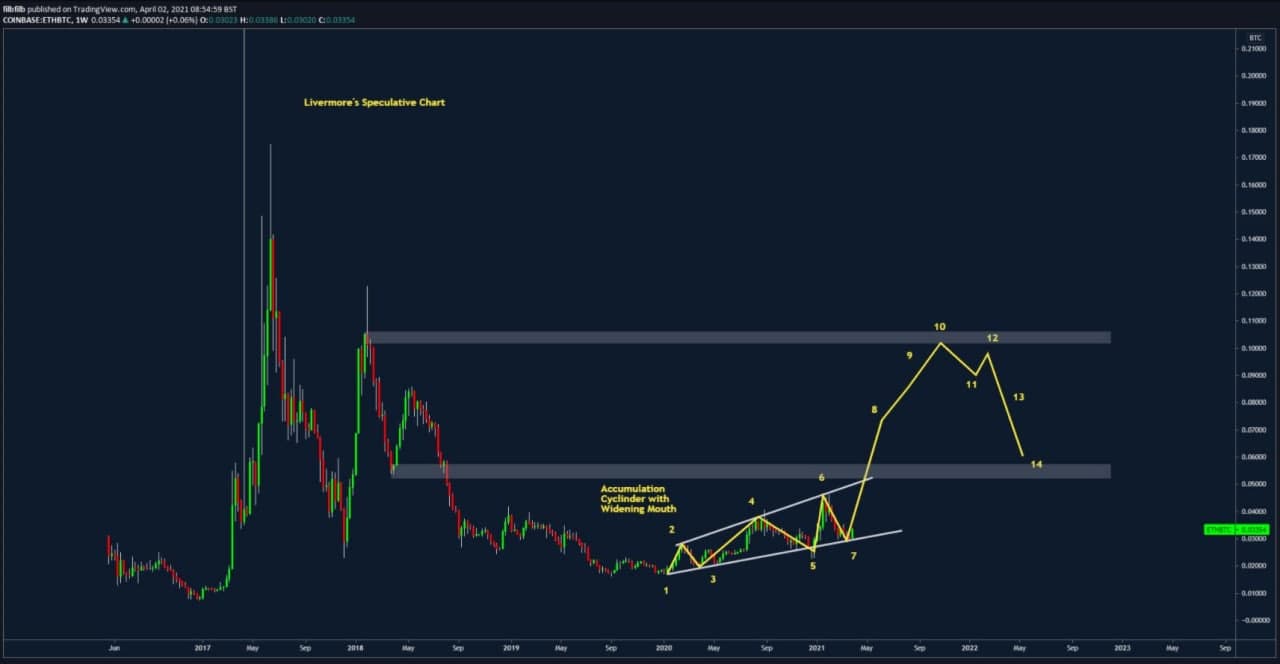 So to summarize, we have been and remain very bullish, particularly up to the Coinbase IPO, with some particular attention being on the alts, with a very specific plan to jump in and out to maximize upside opportunity while limiting time/risk exposure to the market by using commando <https://www.decentrader.com/commando-landing/> as the point of entry.

One watch out is that IPO’s often lead to a sell-off generally, so we may see increased volatility around this time period of the 14th April and should pay particular attention to the time from here to options expiry at the end of the month.