First of all, this is not financial or investment advice. It is an opinion piece looking at the bullish side of the argument for Ethereum. Do your own research and speak to your independent financial advisor before making any financial decisions.

Last week we had a look at Bitcoin and a brief overview of the macroeconomic picture. If you haven’t read that yet, you can view it here. You should recall that the catalyst for each Bitcoin cycle is a halving in the issuance of new Bitcoin, that happens every 4 years.

Ethereum has no fixed supply and was experiencing nearly twice the inflation that Bitcoin was. As virtually anyone can tell you nowadays, inflation devalues whatever is being inflated. However after a (very) long wait, The Merge finally happened. This was the joining of the Proof-of-Work and Proof-of-Stake consensus mechanisms. These are just fancy terms for how the network is secured: Proof-of-Work requires work to be done (via computer calculations) and Proof-of-Stake requires putting some money at stake (in the native token).

A variety of network upgrades came with the Merge, most notably a massive decrease in the issuance of new Ethereum tokens. This dropped from roughly 13,000 per day to 1,600 representing a near 90% reduction. This coupled with a percent of every transaction fee being burnt (destroyed) presents a dramatic reduction in new supply, which is currently forecast to be just +0.013% per year. This is in stark contrast to Bitcoin’s +1.716% per year!

The Merge was dubbed a ‘triple halving’, a nod to Bitcoin’s halving which historically produced a bull market 12-18 months after the halving. This could loosely equate to a bull market 4-6 months after the Ethereum ‘triple halving’ or mid January – mid March. The 1000 day theory for Bitcoin (covered last week) is 4th of February and macro conditions should be improving as winter ends in Europe. These should help to contribute to some Ethereum strength, but we are on the Verge of the Ethereum Surge.


We’ve had the Merge. Completing the set are the Surge, Verge, Purge and Splurge! The first group of upgrades are part of the Surge and Verge. The ultimate goal of the Surge is allowing Ethereum to go from processing 13 transactions per second up to 100,000 transactions per second – more than Visa’s 65,000 per second!. This will allow Ethereum and all the smart contracts built on it to operate without slow transaction confirmation and high fees that have occasionally plagued the network.

In preparation for this, a variety of network fee and code improvements are scheduled for March 2023, when the Shanghai hard fork is due. For those interested in the technicalities, specifically EIP-3651, EIP-3855, EIP-3860 and EIP-4895 are shipping.


Ethereum Improvement Proposal (EIP-4895) is the one that will interest the most people as it will finally allow Ethereum to be unstaked. Some has potentially been staked since the Beacon chain was launched on the 1st of December 2020. There is currently 15,729,049Ethereum being staked and when this is unlocked, one might think that this could create significant additional sell pressure.

However, let’s first try to understand the people who have staked since the beginning. Without any idea when their hard earned Ether would next be accessible, they locked it away having faith in the project, network and developers. The price was around $600, so they have virtually doubled the dollar value of their investment, whilst collecting roughly +5% in Ether each year for the last two years. 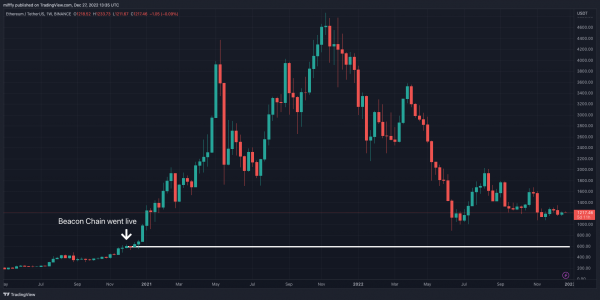 Now with the long overdue Merge and further improvements coming with the Shanghai hardfork, are these early adopters suddenly going to bail on Ethereum and dump everything they have? These aren’t traders and have already comfortably doubled their investment – even after the brutal bear market we have experienced.

Further, as we covered in last week’s newsletter there have been advances in British and European crypto regulation, with improved clarity for how financial institutions can interact and invest into the crypto space. These represent two of the world’s largest financial markets with plenty of capital trying to find profitability as the world braces for recession.

A novel technology, with unclear regulation that lacks the ability to withdraw (unstake) just isn’t going to pass any compliance or risk stress test. However, the implementation of staking withdrawals and regulatory certainty makes Ethereum a much more appealing institutional investment, especially with the staking yield.

The vast majority of current stakers are long time bull-ievers. The implementation of dynamic staking withdrawals allows investors and traders with much shorter timeframes (such as quarterly rebalancing) to also stake, knowing they can withdraw if required.

The second bullish headwind is something that has been plaguing the crypto industry this year with the collapse of 3AC, Celsius and Alameda research. While withdrawals were not available for Ether that was staked, there was a dramatic rise in the use of liquid staking tokens, most notably stETH (staked ETH) through Lido Finance. This staked your Ethereum earning staking rewards, whilst issuing an IOU token backed 1:1 with ETH, that could be used in a variety of DeFi protocols. Knowing that eventually stETH can be redeemed 1:1 for ETH, many crypto firms seeking to juice yield either used this process for staking their ETH or performed an arbitrage trade when stETH dropped below parity.

For example, one could sit their Ethereum on Lido Finance and get the 4.6% APR paid in $ETH. Nearly $5.9 billion is currently staked like this. A stETH token is issued that can be sent to Aave to take out a loan against it. Currently, Aave has $1.2 billion doing this on its platform. The borrowed asset (usually a stablecoin) can go into other DeFi protocols to get more yield.

However, when firms suffered from liquidity issues, they were forced to dump their stETH as their ETH was still locked up. This was done via DeFi protocols and there was simply not enough liquidity for large players and market makers to dump their holdings. For example, Uniswaps 24hr volume for stETH/ETH is currently less than $100,000. For comparison Ethereum’s 24hr volume is over $5 billion. We can see that around the Terra/Luna collapse (when 3AC blew up) in May, the Celsius bankruptcy in June and the FTX/Alameda Research bankruptcy in November that stETH dropped significantly below parity with ETH, going as low as 0.933:1.

There is still significant uncertainty where the contagion stops after the continued fallout this year, but the ability to unstake will bring an end to the billion dollar risk that low liquidity stETH brings. Current market conditions and contagion fears mean that key lenders and market makers are less keen to lend and provide liquidity or will do so with much higher interest rates. When general liquidity conditions improve, the strong projects that have survived the bear market will be able to get funding and investment and we will see more organic growth in the space.

Finally, in anticipation of the Merge we saw ‘buy the rumour, sell the event’ play out, with Ethereum rallying +130% from $880 to $2030 with price currently sitting 38% above the year lows. For comparison, Bitcoin rallied 42.5% in the same period and is sitting a mere 9% above the lows. 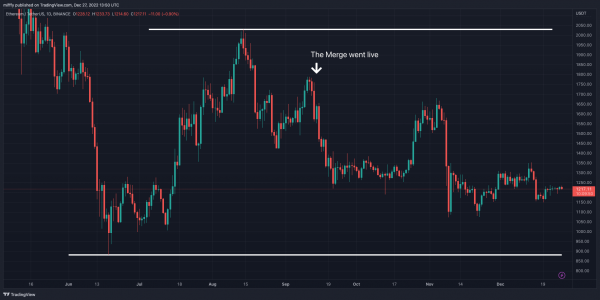 So we have a greater decrease in supply of new Ethereum than Bitcoin, significant network upgrades in a few months time and a stronger bounce off of the lows than Bitcoin showing increased interest from the market. This isn’t to diminish the bullish outlook for Bitcoin, but at some point Ethereum must start becoming much less correlated to Bitcoin as it has different tokenomics and is built for a different purpose. We have seen new tokenomics implemented and an aggressive upgrade schedule for 2023. Maybe that time is now?

However, filbfilb has recently highlighted his thoughts that many altcoins could suffer as Bitcoin dominance could be set for a dramatic rally, could Ethereum get caught up as well? Read more about that here. Further, there is concern permeating the Crypto space that we could be on the verge of more miner capitulation presenting more headwinds. We will have a full video covering this on our YouTube channel, make sure you’re subscribed.

Finally, we’re running 30% off everything until the New Year – just use freetrial30 at discount!

From all the team at Decentrader we hope you have enjoyed the festive period and are looking forward to the opportunities 2023 will provide!

– Thanks for reading,
Miffy